FUNERAL OF ST. JOHN OF GOD

The River Darro and the Funeral of St. John of God 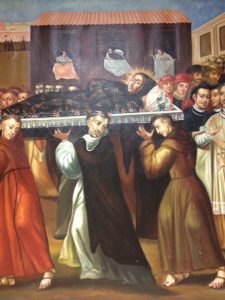 Although originally from Portugal, St. John of God, spent the majority of his life caring for the others in the city of Granada, Spain. This beautiful southern Spanish city is home to the River Darro, which played a very important role in both the life and death of St. John of God.

Many of the people whom St. John of God spent his time caring for lived along the River Darro. The poor and the homeless often had nowhere to go, and this was St. John’s way of finding them and reaching out to them.

Later in his life, St. John of God became very ill. He developed pneumonia after jumping in the Genil River to try to save a young boy from drowning. Unfortunately, he was unable to save the child and became very weak due to this heroic attempt.

One of his benefactors, Dona Maria Osorio took St. John of God into her home and cared for him until his death. Her home, located along the River Darro, is now a museum run by the Order of the Hospitaller Brothers of St. John of God. Also important to note, is that only five of St. John of God’s letters remain today, and one of them was written to Dona Osorio.

After St. John of God’s passing, many of the poor and homeless people that he cared for during his lifetime demanded to be part of his funeral procession. It is believed that approximately 100 poor or homeless individuals stretching about a half a mile long, passed along St. John of God’s coffin from the River Darro to his place of burial.

The River Darro bisects the city of Granada. A tributary of the larger Genil River, part of the River Darro was covered over in the 19th century by the Plaza Nueva, due to flooding issues and to create more space in the city.

• The Puente de la Espinosa from the 16th century

• The Puente de la Cabrera from the 16th century

• The Puente del Aljibillo (cistern). This bridge refers to the water cistern that used to exist on the promenade on the other side of the river.

A partial fifth bridge, the Puente del Cadí built by the Arabs in the 11th century, was knocked down in the 17th century. Only the base and part of the horseshoe arch still exist near the river.

Through the use of aqueducts, the River Darro supplied water to the different rulers living in Granada’s Alhambra Palace.

The River Darro was originally named Aurus, the Roman word for gold, since people used to pan for gold along its banks. However, after the Arabs invaded Spain they began calling it Hadarro. This was later changed to Dauro by the Spanish Christians, and then finally it became just Darro.