MIRACLES OF ST. JOHN OF GOD

The Miracles of St. John of God 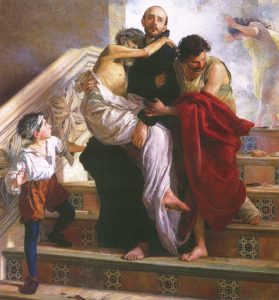 During his lifetime, St. John of God accomplished miracles both small and large. Daily he went out into the streets of Granada, providing help for the poor, the sick and the mentally disturbed. He would often give the cloak off his back to someone who had no cloak. The home he rented was a place of refuge for many.

According to Merriam-Webster’s dictionary a miracle is defined as, “an extraordinary event manifesting divine intervention in human affairs,” and “an extremely outstanding or unusual event, thing or accomplishment.”

St. John’s daily activities of providing a place for unwanted people to feel loved and safe can be described as daily, small miracles for the people who needed help. In the book Saints for Sinners by Alban Goodier, he writes about St. John. “He could wash his patients and dress their sores; he could kiss their feet and let them feel that somebody cared; he could put them to bed and give them a sense of home.”

Keep in the mind, that the Granada of St. John’s time was not the modern city it is today. Roads were unpaved, and people walked everywhere. Their feet were most likely the dirtiest parts of their bodies. By kissing them, St. John imitated Jesus’s actions toward his disciples and showed complete humility and compassion for these individuals.
St. John lived out the commands of our savior to love one another and to love your neighbor as yourself. Jesus says in Matthew 26:40, “I tell you the truth, whatever you did for one of the least of these brothers of mine, you did for me.”

Despite his earnest desire to serve Christ, St. John faced oppression and had enemies who did not believe he was sincere in his service. He would often care for his patients during the day and beg for alms at night. Even though he faced hardships, his needs were always met, and God always provided for his cause (another miracle).
Perhaps the grandest and best known of St. John of God’s miracles was his rescuing of the patients from a fire in the hospital of Granada, and yet escaping from the flames unscathed. For this reason, he is the patron saint of firefighters.

Considered an impulsive man, one night, St. John heard that the Royal Hospital of Granada was on fire. When he rushed to the scene, he saw that people were just standing there watching the fire burn. All the patients were inside the burning building. This non-action was unthinkable to St. John, and he rushed inside, leading all the patients to safety.
Once he knew that all the patients were safe, St. John ran back into the building and started throwing items such as blankets and mattresses out the windows of the hospital. In his mission, St. John knew the importance of these goods for caring for the sick. He wanted to salvage as much as possible.

By this point, the city had brought a canon to try to destroy and separate the burning part of the hospital from the non-burning portion, in its best efforts to contain the fire. However, St. John could not accept this. He ran up to the roof and started separating the two parts of the hospital with his axe.

Although he was successful, he fell through the burning roof. Bystanders thought he had perished in the fire, until he appeared out of the smoke and ashes unharmed.
In an essay titled “St. John of God, Founder of the Order of Charity,” written by Fr. Francis Xavier Weninger in 1877, Weninger wrote, “The flame of Divine love which burned in his heart surpassed the intensity of the material fire.”

In addition to performing great miracles, St. John of God was also the recipient of divine intervention and spiritual favors. Throughout his lifetime, he received assistance from heavenly beings including the Holy Mother and the Archangel Raphael. His name of St. John of God comes from a vision he had of the infant Jesus, who bestowed the name upon him.

Another time, St. John experienced a heavenly vision when he found a dying beggar on the streets of Granada. St. John carried the man to the hospital, and began washing the beggar’s feet. While doing so, the man became transfigured with a shining light and brightness enveloped both himself and St. John. Later as St. John was walking through the hospital alone, patients saw such a bright light surrounding him that they thought he was on fire. He had a difficult time convincing the patients that all was well.

St. John of God of was canonized by Pope Alexander VIII on October 16, 1690, over 140 years after his death. Today he remains the patron saint of hospitals, the sick, nurses, firefighters, alcoholics and booksellers. His legacy and miracles live on through the Hospitaller Brothers and all of the good works they are accomplishing in our world today.