Our Founder, St. John of God 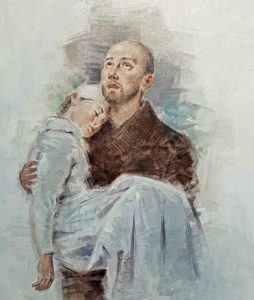 John Cuidad, who is known today as St. John of God, was born in Portugal in 1495. An only child, he was taken from his family for unknown reasons by the Count of Oropesa at the age of eight. As a young man, John worked as a shepherd and laborer in the Portuguese countryside before moving to Spain and serving as a soldier under the Holy Roman Emperor Charles V.

After his time in the military, John became restless and decided to travel. While he was in North Africa, a Franciscan Friar advised him to return to Spain. John moved to the city of Granada in southern Spain where he opened a bookstall at the Elvira Gate, outside the entrance of the city.

The recent invention of movable type helped John share the word of God at his bookstand. He made a good living selling religious books about the Catholic faith.
Yet despite his comfortable lifestyle, John continued feeling restless. On St. Sebastian’s Day (January 20), John followed a crowd of people going to hear renowned preacher, John of Avila, who is known today as St. John of Avila.

During the sermon, John underwent a major spiritual experience. He approached John of Avila after the sermon, confessed to him and received spiritual counseling. John wanted to atone for his sins, acknowledging that there was no greater sinner than himself.
After his conversion, John temporarily went into a state of insanity. He was seen beating himself and “acting like a madman.” He was taken to the Royal Hospital, a psychiatric facility, where the warden was instructed to provide John with care and a quiet place to rest.
Unfortunately, John’s care was cruel and inadequate. Like other psychiatric patients at the time, he was beaten and stripped naked if he did not comply with his caretakers. He underwent harsh treatments such as being hosed with cold water. At the time it was believed that this would shock patients back to reality.

John learned very quickly that it was better not to rebel against his caretakers but to comply with their requests. After a while, he was given special privileges, which allowed him to walk freely throughout the hospital. He took advantage of these privileges by visiting with other patients. By encouraging, supporting and comforting them, John felt he aided the nurses in providing better care. After a few months, he was considered well enough to be discharged. After his release from the hospital, John prayed to God and the Virgin Mother for guidance. He knew one of his first needs was finding a place to live. He was fortunate to meet John Miguel Abiz de Venegas, a prominent citizen, who allowed John to stay on the front porch of his house.

Written over the house’s entrance was the phrase “the heart commands.” John seriously thought about its meaning and decided to adopt the motto for himself. John felt called to help the poor, sick and homeless. He spent his days traveling the streets of Granada helping those in need, and often taking them to live with him. Unfortunately, John Miguel Abiz de Venegas did not agree with this situation. He encouraged John to find other larger and more appropriate accommodations for the people he was helping.
John searched the city looking for assistance in obtaining his goal. He slowly drew a dedicated circle of followers who realized his sincerity in caring for others in need. He was able to find a larger place to continue his ministry and over time it became a place of refuge for the poor, sick and abandoned to stay and receive care. It is believed that this was the beginning of his ministry as St. John of God.

Daily, John went throughout the city seeking funds for the poor or sick. While many people donated or assisted him whenever possible, often he would share his resources with the people that he met during his travels. Despite his generosity, the number of poor, sick or abandoned people still seemed to grow. With the help of his benefactors and friends, John was able to buy an old convent that allowed him to provide a safe haven for these individuals.

Caring for people that the rest of society had shunned or neglected was both physically and mentally demanding on John. Years of hard work, had eventually taken its toll on John whose health began to decline rapidly. Even in failing health, he still put the needs of others before his own. It wasn’t until the Archbishop of Granada came to see John that things began to change. The Archbishop promised to take care of John’s many debts and continue his mission of caring for others. He then blessed John and told him to prepare for his journey to the Lord. Knowing that the poor and sick would be well cared for by his faithful followers, John became bedridden. When he knew his time had come, John died on March 8, 1550 at the age of 55. He died peacefully kneeling beside his bed with a crucifix in his hand.
John was canonized in 1690 by Pope Alexander VIII. In 1880, Pope Leo XIII declared him the patron saint of the sick and those who care for them. Today his followers are known as the Hospitaller Brothers of St. John of God. The Hospitaller Brothers continue his mission of caring for the poor and sick in 53 countries around the world. The order has also been given the honor of providing medical and dental care for the Pope.

Although it has been more than five centuries since the life of St. John of God, his legacy of showing love and compassion to the less fortunate still continues in our world today.