Insight into the Unique and Mysterious Signature of St. John of God 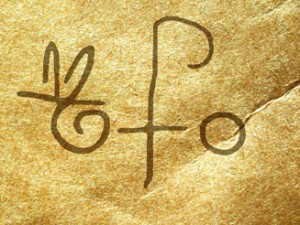 Many times throughout the day, we are asked for our signature. Whether it is for a credit card receipt or a permission slip for a child’s school trip, we often sign our names without giving it a second thought. However, after seeing the signature of St. John of God, it is clear that he put a great deal of thought into the letters and symbols that would represent his name.

While it is known that St. John of God was a literate man—he was able to read the Holy Scriptures and books about the lives of saints—it is believed that his capability to write was limited. Just as many executives dictate a letter to a secretary, it was common for St. John of God to dictate his letters to a scribe. In his third letter to Dona Maria de los Cobos y Mendoza, the Duchess of Sessa, St. John of God writes about the mysterious letters and symbols he uses as his emblem. He writes about sending her his emblem of “three letters in gold thread on red satin.”

The use of both of these colors is symbolic. Red represents the blood Christ shed for everyone and his passion, reflecting St. John of God’s belief that, “there is no higher contemplation than that of the Passion of Jesus Christ.” Gold, a precious metal that is not valuable until it is refined, is used for the lettering to show how the soul must be separated from worldly things in order to be purified and shine before Jesus.

St. John of God also discusses his use of the three letters to represent three virtues: faith, charity and hope. Faith, which is practiced, means believing everything the church believes and professes and following its commandments. Charity has two parts. The first part is for our own souls, and the second part is about loving our neighbors as ourselves. Last, but not least, is hope in Christ that in exchange for our sufferings in this life, we will receive eternal glory through Christ’s mercy.

St. John of God sent his emblem on a cloth with four corners to represent four additional virtues. These four virtues—prudence, justice, temperance and fortitude—are meant to complement the other three.
Finally, St. John of God mentions that on the backside of the cloth is an x-shaped cross. This was designed to represent the cross that each individual must bear personally. The goal of salvation is the same, but the path there is different for everyone.

Although the meaning behind St. John of God’s signature is not completely certain, there is one thing that we can be sure of. The fact that hundreds of years later, his signature is still being studied and contemplated indicates that this was no ordinary way of signing a name.