The Staff and the Bread Basket: Symbols of the Life of St. John of God 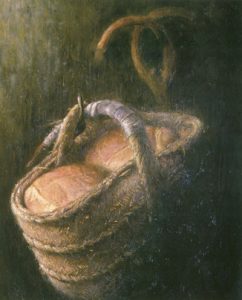 During the time of St. John of God (the 16th century), when individuals would travel from town to town, many carried a pilgrim or traveler’s staff to make their journey easier. The staff had two hooks on it for carrying a basket or whatever it was the traveler needed. When St. John of God walked throughout the city asking for alms for his hospital, he also carried a pilgrim’s staff. On the right hook, he hung a coin box with a cross, and on the left of it, hung a basket with food, mostly bread, meat or fish.

Instead of sending someone to run his errands, St. John of God took it upon himself to buy the food, charcoal and other supplies that the people staying with him needed. This gave his boarders and patients privacy and the opportunity to make clothes or perform other work.

Article 3 of the Order’s first Constitution in 1585 specifically commands that the Brothers carry a staff and bag similar to the one used by St. John of God when collecting alms. This requirement united them, as the first Brothers were identified by these objects.

In the Biography of St. John of God by Francisco de Castro, the author relates a tale about St. John’s basket. St. John of God was near the Alhambra in Granada, Spain, when he accidentally bumped into a gentleman. His basket caught hold of the man’s cloak and put it in disarray. Although St. John apologized, the man was very angry and slapped him across the face. After another bystander intervened, and the man realized it was St. John of God that he had slapped, he begged forgiveness, kissed St. John’s feet and invited him to dine with him. St. John declined the invitation, but the man later sent 50 gold escudos for the poor.

Later in his life when he was ill, St. John used his basket as a pillow. Today, his staff and begging basket are conserved at the Order’s archives in the Casa de los Pisa in Granada, Spain.